Which Would You Rather: Two Active Dogs, or One Lazy, One Active?

Lately, I've been thinking for my future second dog (which probably won't happen for another two years at this rate)....

that it would be cool to have a second dog that maybe doesn't require SO much in terms of just always needing exercise, a lot of attention, stimulation, etc. Like, Jackson is not really a "low maintenance" dog in most peoples terms. He's easy in the sense that him and I click really well, and he's so easy to take everywhere and not worry about him, super easy to train, etc, however he really does need a ton of attention to be happy, and a lot of exercise to not start driving me bonkers.

So I often think it'd be neat to have Jackson as my "super-active" dog and get another dog that wouldn't mind skipping out on things like agility, swimming, etc. That way I wouldn't feel as guilty doing something with Jackson and not the other dog (since the other dog probably wouldn't want to do the activity anyways).

On the flip side, it'd be nice to have another dog equally as active or more active than Jackson for Jackson's sake - however, in general, I've found that super energetic dogs that come into our house tend to irritate him (even though he himself is that way, if that makes sense). And I'm not sure I could handle two of him! LOL :yikes:

So ANYWAYS - which would you prefer, and what do you think is a better pair?

PS - I wouldn't ever purposely force a dog to be lazy, or anything. I would still keep the dog fit and fairly active... but I think you get what I'm saying.

I would rather have 2 active dogs, but that's just me.
Also remember that there are different kids of energy for different breeds and individuals, and some people prefer one over the other. Some dogs want to to bounce off the walls and be spaztastic, and others (which I prefer) like to have focused activity and need more mental stimulation as opposed to a super energetic dog (like the former) that it satisfied with a good run.
If you and Jackson are happier with a lower energy dog, but still one that would happily play with Jackson, that sounds ideal for you.

I think life is easier when your dogs match size/energy. I find 5 papillons to be really easy keepers and they get along great.

Of my guys, Mia is a spaz and Summer is lazy but also good to go whenever. Beau is a similar energy level to Summer. It works well.

At this point in my life I have zero desire to own something low energy and low drive. It only goes up from Mia.

For me, it depends on how they get along.

I have two medium-to-high energy dogs in Webster and Kim and one very high energy dog in Mira. I realize these things are relative so to provide context I'm comparing them to most of the dogs we hang out around --- which are performance dogs (agility, field of various sorts, herding, obedience) sporting and herding type dogs for the most part. Not your average pet, whatever that image that term conjures up.

Kim and Mira really do blow off a lot of steam together as they tear around. They both definitely need real dedicated exercise time, training time and mental work to take the edge off but having them burn off the extra steam together is both helpful, entertaining, and mentally good for each of them.

Webster is also fairly highly energy but in a different way -- he needs mental work or he gets a bit nutty and starts listening to his shoulder devil. He doesn't work any of this off with the girls at all ever. However he does greatly enjoy various puzzle games and can entertain himself for quite some time if he is given some sort of problem to solve.

If all three dogs were entirely dependent on me for 100% of their mental and physical energy outlets it would be a full-time job. Fortunately their balance is such that this is not the case. So it really just depends on how the individuals involved as well as group dynamics.

Just my 2 cents though.


Kim and Mira exchanging glances as they matched each other stride for stride around the yard and field earlier this week...and I sat on my bum and took pictures lol 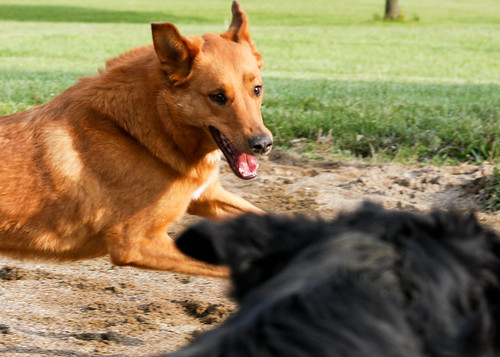 I don't think I could handle having multiple dogs that required energy to be burnt via one on one interaction with me. I want dogs that can go at the same pace/have the same physical capabilities (the one thing that is bad about Gracie is that since she's a Dachshund she can't keep up with the other three dogs, and likely won't be able to go on walks with the bigger dogs due to distance/speed traveled), but I wouldn't want two highly active dogs (unless they were calm in the house).

One thing that is funny (to me) is that even though Mia has about 10 times the energy of Summer, Summer is just as needy. Only it's the annoying 'I want to snuggle on your lap and kiss your face' constantly kind of needy. To be honest, I find her neediness more tedious than Mia. Especially because any time I try to do something with Mia Summer shows up in my face 'Oh you like dogs? You want me to get in your lap now, right?'

Beau is easy as can be. So not needy.

Honestly, I have two very active dogs (yes, I'm saying that knowing full well that one of them is a great dane) and am about to add the third. I do off leash hikes separately, training times separately, walks separately, and let them out separatley for the most part. It is a lot of work, but I love it. I used to have one lazy dog and one active dog, my bond between me and the lazy dog suffered because of it. I loved him, but wasn't nearly as close to him as I was with the active dog.

I would not say active and lazy...it's more active and energetic and more laid back.

That is what I have here with Watson and Menchi. Watson can be a handful, his mind is very active and he is physically very energetic. Menchi is more easygoing mentally and emotionally than he is...but she can and does keep up with him physically and mentally if she feels the need.

Their two different personalities make a nice balance for me...

Well right now I have one lazy one and one active one, and it works out wonderfully. Unfortunately I'm really drawn to herding breeds lol so probably in the next couple years I'll have two active ones - but I have to say, I really like how my current setup works. I'm a lazy person myself sooo I don't really want to be overrun with super active dogs.

I'm really just kind of hoping that Juno will have mellowed out considerably by the time I get another dog.

If they are well trained then definitely 2 active dogs! That way you can take them both hiking/adventuring and don't have to worry about one getting tired or needing to cut short the outing.

PWCorgi said:
If they are well trained then definitely 2 active dogs! That way you can take them both hiking/adventuring and don't have to worry about one getting tired or needing to cut short the outing.
Click to expand...
Very true, good point.

And I definitely DO get frustrated with "lazy" dogs, or unmotivated, whatever you want to call it.

I guess I'd want somewhere in between ideally.
T

Hand me active dogs all day long! My group bores me half the time, honestly... I'm like, "Let's play fetch! Let's run, and play rug, and go for walks, and do some training, and go swimming, and some more fetch!!" and my dogs are like... No thanks, let's eat grass. LOL
T

Having had one lazy and one active, I would rather have two with the same energy in the future. Even though Tucker was lazy, he always wanted to go and would give me sad eyes when he got left behind. I felt so bad because if he had the energy for the big walk I wanted to do with Spy I would have brought him, but he always got tired part way through. So, I would rather have two active dogs that could go for the same amount of walking/hiking, so I didn't have to leave one behind.

PWCorgi said:
If they are well trained then definitely 2 active dogs! That way you can take them both hiking/adventuring and don't have to worry about one getting tired or needing to cut short the outing.
Click to expand...
Missed this, but yeah I agree. Tucker always wanted to go at the beginning but couldn't keep up about halfway through... So I had to A) leave him at home and feel bad about it or B) cut Spy's walk short.

I didn't have time to walk both separately during high school and uni, so Spy's often got cut a bit short or supplemented with the chuckit (which I hated doing, I hate when he fixates on things too long). I really had to make time as Tucker got sicker because he had to go on super relaxed, slow and shortish walk as the cancer spread.

Spy barely got any good exercise in the last few weeks because I was nursing Tucker so much and just could not handle his sad looks when I tried to leave him at home to walk Spy... It was awful.

Right now I have 5 active dogs, one pseudo activedog whose body just can't keep up any more and one lazy dog. I like 3 of the active dogs because they have an off switch ... The other 2 are puppies who have never heard of the term and ate going to have to be crated pretty much all the time in the next few weeks because I have exams.

I liked the way the dogs were before the puppies etter though. I had 4 active dogs so it was easy to pair them up. Fudge and Scamp went together and Tika and Taz went together. Now it's more difficult because I have had to pair Fudge and Aura up walks because they both behave better together. This means Scamp and Taz aren't getting as much exercise because they have a good off switch and I'm trying to run the naughtiness out of Aura. Id be much happier if they were lazy dogs who would t care about being left at home.

2 active. At least they can wear each other out playing together lol

Tru evil has no pantyline

I have two off the charts active dogs and one that would like to be active but can't anymore.

It was so much easier when all three could do our long walks and handle it. Now Lilly is left behind a lot. It makes us all sad.

I find lazy dogs frustrating. There's a reason the next dog we're considering is considered..... Mentalist

I'd actually prefer two (or even 3!) lazy ones. I hate having active dogs, and in the future, I'll only be adopting dogs 10+. That is unless something happens to Katy or Lucy before then, as if that happens, I'll adopt one the same age as the remaining girl.