OMG, i can't believe I'm even posting this

This is something more than animal abuse. Depending on state laws, its likely a weapons offense, which could carry some significant jail time. The law tends to treat people who shoot guns on other people's property much different than someone who does something in their own house. It all depends on the ability to match the gun to the guy, and it is not necessarily as easy as TV makes it out to be.

And please, why start with the whole no chaining stuff. Sure, if the dog was not out, this might not have happened, but its not doing anybody good to rub it in. That is how those comments are comming off.

OMG....that's sooooooooooooooooo terrible!!!!!!!!!!!!!!!! I'm so sorry!!! I had a collie when I was still in high school who was about to have puppies, and my neighbor shot her and threw her on the side of the highway...it was awful!!! RIP little Nala!

I feel for the family. What a horrible thing to come home and see. I hope somehow the person is found who did this.

That is just horrible! That guy is freakin' nuts! You know....someone who can shoot an animal like that....not a dog killing his livestalk or coming on his property or running deer...no, this guy is just coming onto peoples' property and killing their dogs. What happens when he gets bored with that? Will it be a human next? The law needs to be pressed to do something about it. The newspapers need to be called. If it gets nice and sensationalized, that sometimes puts the pressure on to do something about it. It's just sickening! I am so sorry for you and your loss and your neighbor's.

I am SOOOOO sorry for there family!! and You!!

Sending prayers for them and they catch this SICK, WACKY, TWISTED, MAN!!!!
P

#27
Sorry for your and your neighbor's losses, but without someone seeing actually happen, nothing will probably happen to the guy. That's just mean. if he wants to shoot at something, why doesn't he shoot at birds or stray cats instead of someone's family pet. It's what we do around here in the summer.There's also the occanisonal coyote that comes out. I could understand if the animal was on his property( we have a law that says if another person's animal/ stray or wandering animal is on your property then you have a right to shoot it and make the owner( if there is one) pay for the damage the animal caused. it mostly refers to livestock), but chained up in another person's yard! that's not right. Even around here if the guy shot someone's dog and he had animals, they would be gone or dead by the end of the night. People don't like their dogs messed with around here espically if they're prized hunting dogs.
D

Purdue#1 said:
Sorry for your and your neighbor's losses, but without someone seeing actually happen, nothing will probably happen to the guy. That's just mean. if he wants to shoot at something, why doesn't he shoot at birds or stray cats instead of someone's family pet.
Click to expand...
better yet...he should use himself as a shooting target...

I am so incredibly sorry for the loss of Nala... that is AWFUL. i just dont understand people...how could anyone WANT to do such a terribly disgusting thing pooor, poor nala. And poor, poor beau too I really hope they catch the guy,and he gets some hefty duty jail time (well, i really wish they could tie him to a stake and leave him half dead, but we all know that unfortunately wont happen)

I'm so sorry you had to be witness to this twice. I feel greatly for the family of Nala.

IMO, the wacko should be stuck in jail for the rest of his life, where he will rot and die a long miserable death. I'm sorry, but thats what they should pay for killing an animal. Wait not an animal, TWO animals. I really hope they catch him and his punished correctly.

Keep us informed of anything else that happens...
F

the scariest part of course is the fact that even if they catch this guy not much will be done, and even scarier is the direct connection between animal abusers and those sickos that kill innocent people!
so he gets bored with shooting tied up/confined dogs, whats next kids playing in their yards?

I agree, the animal cruelty laws need a serious overhaul, especially due to the direct corrolations that are documanted!

I also agree, get this to every local and area newspaper and channel that will listen! once the press get a hold of it, the pressure will be on the cops to do something about it! get all your neighbors involved, im sure any with dogs that spend anytime outdoors will be happy to voice their opinions to the press.
and at the very least with the news out, at the very least people will be extreemly carefull with letting their dogs outside.
I realy hope they find him (and then turn their backs while a couple of dog lovers beat the snot out of this person)

cowgurl6254 said:
The weird thing is that we thought he had moved out of the neighborhood, but a couple of kids say that they've seen him walking through it recently. Actually, Nala's owners already have one police report on file against this guy because the mom was washing dishes one night and saw the guy come into their backyard with an axe and a piece of rope. There were no cars in the driveway so he probably thought that no one was home. He went over to Nala and started to tie the rope around her neck, but the mom called the cops and he ran away when he heard the sirens coming. This guy is really freaky and desperately needs to be caught. It's really making me nervous.
Click to expand...
That blows me away. The cops do need to get involved with this guy because it sounds like exactly the kind of behaviour that is a precursor to them finding bodies in his basement - human ones. What a psychopath.

i hope they find him, tie him via rope to a stake in the ground and shoot him with his own gun close range!
Click to expand...
Seems fair to me.
K

OMG!! That's so awful!!! Some days I really hate the human race and am embarassed to be a part of it.. I'm so sorry for that pupper and her family.. How very awful..

I agree with Ruby. People who are cruel to animals often start there and become more dangerous. He needs to be caught before he strikes again. What a sick person. So sorry to hear about the loss of both dogs........how devastating
4

gaddylovesdogs said:
WOW. You really just react to things you THINK are being said, don't you?

I never said they were horrible people. I never said they didn't love their dog. I never said it was okay for this man to kill somebody's dog. I said why was the dog left on a tie-out when NO ONE WAS HOME? And ESPECIALLY when they KNEW there was some CREEP who wanted to KILL THEIR DOG? I most certainly would never leave my dogs out unattended if I knew someone was trying to murder them.

Looks to me like you're the one making the assumptions.
Click to expand...
Nice snap response.
C

I don't even know what to say to some of you. To those of you who have expressed sympathy and support, thank you.

To those few of you who insist arguing with me over the fact of whether or not she should have been outside, you need to go back and get the facts straight. First of all, this guy does not live in the neighborhood anymore. The rope and ax incident happened several months ago, so the owners assumed he had been scared off when the cops came. Explain to me how a large dog with a bladder control problem can stay inside for over 12 hours while both the owners work? There is no option but to leave her outside. Secondly, once again, Beau was in A LOCKED FENCE when he was shot. It doesn't matter where the dog is if there is someone wanting that desperately to harm them. If you don't know the situation, please don't judge the owner, and I don't see any reason to argue the point further.

To those of you who are questioning why the guy wasn't prosecuted when Beau was shot, it's because there was no hard evidence. There is still no hard evidence so it's unlikely that anything major will happen to him. The only hope is that they can match the gun with the crime. Right now they are trying to obtain a search warrant for his house, but they have to present the judge with reasonable evidence. This is going to be a long battle, but I intend to see it through. Thank you again for your support.
C

Here is a picture of my sweet Beau a few days before he was shot. This is the last picture we ever took of him. He looks really scary doesn't he... 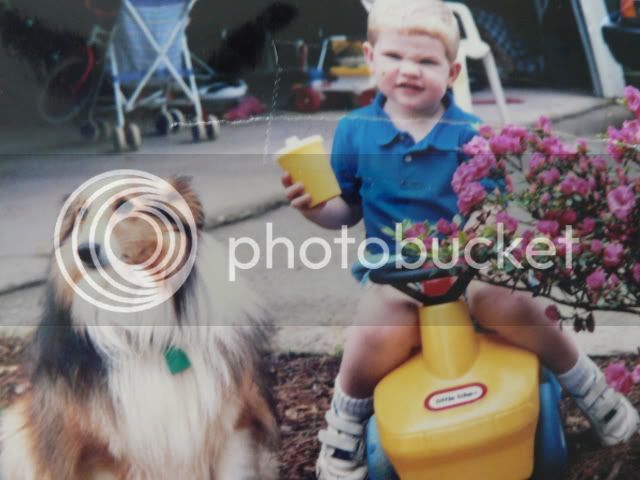 My all time favorite picture of him..such a sweetheart