So, I want to like Dr Who, but in watching the first season it's really just not doing it for me.

Is there any way I can just start watching later ones? Like start when a new Dr starts and not be completely lost?

If so, suggestions on where to start?

I started watching a couple of season ago (the newer seasons are on Netflix) since my boyfriend is very into him. He explained a lot to me but I don't believe you HAVE to watch all of the seasons. It would probably help to read up on it a little bit, but since it's been going since the 60's that's a lot of TV watching. I think it depends on what you want in the show. My boyfriend likes the whole 1,000 things going on at once, notice every detail vibe it has. But I personally just like to watch it for the fun. Most of the shows stand on their own. The BIG things will be pretty much pointed out.
So I guess it just depends on why you want to watch it and how much time you want to invest into it. I think it's a great show, though

Kat/Oak AKA The Nice One

You can pick it up from the 9th doctor and you'll be fine. That's what I did. He is amazing, so my only suggestion is to not skip him Have fun!
G

Are you watching the very first season or the first of the new seasons?
S

If you're watching the old ones - from 1963 to 1989ish - you most likely won't like them until you get into it and know what you're doing. I'm on the 4th Doctor now, and I am LOVING it, and he's now my favorite doctor. But if I had tried to start there, I never would have been able to get into it.

If you're watching the first of the new ones from 2005, that's the 9th Doctor. I liked him, but there are tons of people that don't. There is a new Doctor, the 10th Doctor, the following season, so you could start there. It's also super easy to start with the 11th Doctor in season 5 of the new ones. And if all else fails, I like to start people off with "Doctor Who: A Christmas Carol" because it's super fun and it's the episode that made me actually like the 11th Doctor (I really didn't want to see 10 go but I'm over it and 11 really is great).

You could actually start anywhere, but those are the best starting points.
S

OH! And if it helps, this is what Doctor Who is about (found it on Reddit): 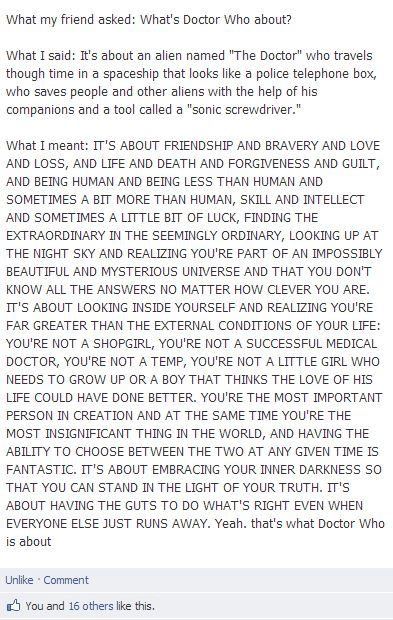 Saeleofu I love that! <3 Ive been a Whovian since childhood I grew up on the classics (#4 still my fave) but if you are just starting you should start with the new seasons and then once you become utterly enthralled in the universe go back to the originals, then move on to the rest of the Whoniverse (Torchwood, The Sarah Jane Adventures, and K-9 and Company ect).

It you have kids you can appreciate watching the original rugrats with them knowing Tommy Pickles is based off of The Doctor and then there is things like this http://doctorwhosthere.tumblr.com/page/2 <things that make me happy XD >

I JUST started watching the first of the new ones (on netflix), so I guess the 9th dr? I don't know that much about how all that works.

Then I stopped, because I had been watching it with my friend but then we both got kind of busy and sort of lost touch. I should just get back into it on my own but I hate watching tv by myself.

Wow, to be honest, I've read about so many people liking the show and was going to check it out and I NEVER knew it had been on for so long? lol, I thought it was a new-ish show.

Does Netflix only have the recent ones? I think I'm realllyyy confused about all this 9th and 10th doctor stuff.

JacksonsMom said:
Does Netflix only have the recent ones? I think I'm realllyyy confused about all this 9th and 10th doctor stuff.
Click to expand...
I believe so. Because I started with the pilot on Netflix and it had the one from 2005, not the older one.

The show ran from 1963 to think 1996. During this time, 8 different actors portrayed the doctor.

In 2005, the show was revived. I don't think it was necessarily a remake, but it explains everything from the beginning. At that time, the "9th doctor" or the 9th actor playing the doctor. Now it's on the 11th doctor.

Saeleofu said:
OH! And if it helps, this is what Doctor Who is about (found it on Reddit):

My first doctor was #4, Tom Baker, and he will always be my favorite.

But If you start with the new doctors, the 9th doctor is the first "new" doctor, you should enjoy those.
S

The Doctor is not immortal. He can generlly regenerate, but only a finite number of times. Some things kill him too quickly to regenerate (such as a direct blast from a Dalek), and if he gets killed during the regeneration process he's really dead. Anesthesia suppresses regeneration and there have been times the regeneration itself has nearly killed him...it's a "dodgy" process, in his own words. The Doctor also seems to be particularly bad at regenerating when compared to other timelords.
S

Oh, Netflix has many of the old ones as well as most of the new ones. You usually have to search for the old serials by name. There used to be an average of 4 half hour episodes per serial, sometime as little as two up to a maximum of 8 or 10. Most of the serials from the first nd especially second Doctors aare completely lost thanks to the BBC's havit of trashing tapes after they air back then. I think most if not all of the audio has been salvaged, though.

My favorite part is now skipping around watching 9 10 and 11 in random order. I catch SO MUCH more than I did the first time, and there are some episodes I've now seen 5 or 6+ times.

Usually I watch 10 and 11. 9 I love to death, but he really is a rather darker doctor. 10 for sure has his moments though, and there are some episodes of 10 I don't really want to watch again because he's so dark in them.
S

I catch SO MUCH more than I did the first time
Click to expand...
Oh, definitely! There's SO much in every episode it's impossible to catch it all the first time around. Even now, after watching many of the classics, I find more things I never noticed. I just watched Stolen Earth/Journey's End (again) and that's one that until you watch Torchwood AND the Sarah Jane Adventures AND some of the classics (at the very least Genesis of the Daleks) you can't fully understand it all.

I personally love the dark, dark episodes. That's why I like Torchwood so much. The darker the better. Don't get me wrong, light-hearted episodes are great fun. But there is very little tv-wise that makes me cry, and some nights I WANT to just watch Doctor Who or Torchwood and cry.

I'm currently about halfway through Leela's run as a companion in the classics. I love her.

I just finished season 9, I liked the doctor, I'm sad he's gone I almost don't want to keep watching, I don't like change

PWCorgi said:
I just finished season 9, I liked the doctor, I'm sad he's gone I almost don't want to keep watching, I don't like change
Click to expand...
I know. It gets better. I totally felt the EXACT same way.
S

PWCorgi said:
I just finished season 9, I liked the doctor, I'm sad he's gone I almost don't want to keep watching, I don't like change
Click to expand...
That will happen when you get finished with 10, too. Even more so in my case. Out of the three newest ones, 10 is my favorite, but I LOVED 9 too. 11 has really grown on me, but right about now I'm hoping he regenerates at the end of this season. Too many seasons of the same Doctor (and the same Companions, that can't have helped). Yes, tom Baker did 7 years, but apparently he overstayed his welcome, too.

I really don't want 11 to go. Like seriously. He can't live forever, 11 has to stick around longer.

10 is definitely my favorite doctor.
S

Well, he can regenerate 507 times. Or something

Traditionally there can be 13 incarnations. BUT there have been SOOOOOOOOOOOOOOO many ways to get around that rule, and that's just since the reboot. The Master figured it out. The Doctor can too. I personally think a particular thing that happened in the middle of series 6 has a LOT to do with getting around that limit.
You must log in or register to reply here.
Share: Facebook Twitter Reddit Pinterest Tumblr WhatsApp Email Link