I'm honestly not sure anyone has ever correctly identified Rowan as being male. He attracts a lot of attention when we go out, and it's always "what's her name?" "what kind of dog is she?" "she's so pretty!" On rare occasion I get asked "boy or girl?" but no one just goes with boy. He is a pretty boy, no doubt about it.

I think that Riff looks like a boy, and people have never assumed he's a girl, although he doesn't get as much attention since he's not as friendly as Rowan. I think he acts like a boy, though. You know the guy who is really not very bright and gets bad grades because he goofs around too much, but everyone likes because he's a nice guy and is so much fun to be around? Riff is the dog equivalent

I think Lo definitely looks like a girl, but there are a lot of people who call her a boy at first.

I must not take Hudson out and around a lot of people because I can't really remember anyone asking if he is a boy or girl. But, I think he is very masculine, especially compared to his sisters

I laugh and say the only place that people know Abrams is a Chessie is Tractor Supply. People there say, "Oh, look at that gorgeous Chessie. I had one of those. Best dog ever." People at Petsmart say, "Oh, my son has a Lab just like this one! Only bigger!"
Click to expand...
It's actually super tempting and I am very eager to see how Abrams turns out as he matures. I won't be for a while because we are a two dog household, but I love water dogs, I love retrievers, I love the look and athleticism of the breed, love that there is not a huge split, and the more DH travels the more I like the idea of a dog with a but of a guarding instinct.

Desoto has a very stocky build and a blocky head which helps people peg him as a boy I think.

People usually ask if Radar is a boy or girl and don't assume either one. I dont know if it's harder for people to guess small dogs or due to the fact that he has green and red harness and leash that don't really point to if he is male or female. He has a lot of coat which makes him very masculine looking to me and westie owners always know.
A

Poor Em is just too manly for her own good.

Gracie is ALWAYS mistaken for a boy. Now she has a pink harness with a pink plaid leash.
S

AmberH said:
Poor Em is just too manly for her own good.

Click to expand...
What on earth was she doing in that photo? Looks like she's all but standing on her head.

Saga is very girly looking. She does occasionally get called a boy though because all Dobermans are male, of course. She acts like a prissy girl, too.

Nico is um, kind of bitchy looking. He's not built much like a male and to top it off, he has an embarrassingly small manpart, so a quick glance doesn't reveal gender. He also usually full on bitchsquats when he pees. He only had one testicle and was neutered early. The vet that neutered him said that the undecended testicle more resembled an ovary than it did a testicle. Considering momma was homeless, malnourished and emaciated when she was pregnant, it's not surprising that puppies had some issues with development.

Quinn hasn't been called a boy in I don't know HOW long, despite the fact that she's almost always in blues, turquoise, or black. She got called a boy (or people asking what she was) occasionally as a puppy but now everyone realizes she's a girl. Her color definitely helps, plus I do think she looks like a girly girl. 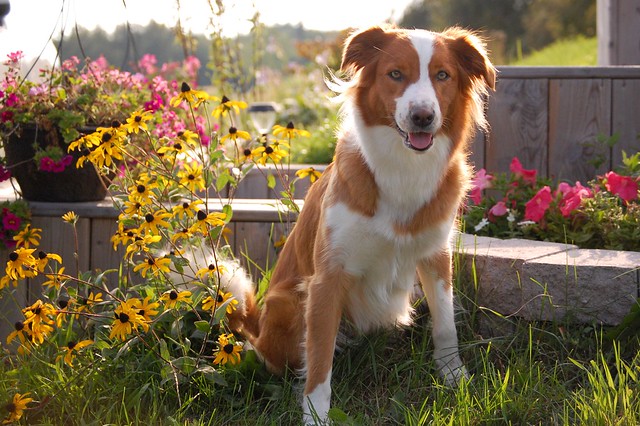 
Everyone realizes Ned is a boy - the short coat doesn't hide a thing lol.

Everyone always assumes Zander is a girl. Which I don't understand, because I think he looks pretty masculine. But I think everyone just assumes Sibes are an all-female breed.

SevenSins said:
Depends on who you ask. People with Pitorstaffs (UKC APBT with a lot of Amstaff blood) or American Bullies think Spike is a bitchy "reindeer." APBT people think he looks like, well, a he.

I think he looks all male, sporting a pink leash even.
Click to expand...
He looks masculine to me!

I'm always surprised that people in other breeds correctly identify Tess as a girl, since she's a blocky little thing, and of course the Staffords are more heavily built than the average dog. But really, she doesn't get mistaken for a male. Except once, at a dog show, by the judge, which was pretty freakin' hilarious. Tess was still in the classes, the judge had already judged the males and the bitch pups, I bring Tess in for the Bred By bitch class, put her on the ramp, and the judge goes looking for testicles. WTF? If you can't tell a bitch from a dog, can't you at least keep track of where you are in the judging order? It's not like it freaking changes!

Quinn is a butch bitch, but definitely a bitch. We often say if she was a person she'd be the girl in the club in the shortest dress possible, looking like she spends 20+ hours a week in the gym with some poor guy pressed into a corner dancing at him, totally oblivious to his cries for help.

People do think she's a boy but I think its often after they hear her name. Liz is unbelievably slim and feminine, I think she's the only one that no one ever calls a boy. Keena's a blockhead, so I get it. Rage is a muscle bound crack head with absolutely no refinement to her personality, so I get that too (also, she lifts her leg) but at 34 lbs Daisy is the most feminine basset I've ever seen and everyone STILL calls her a boy!

I personally think that Trent can look a little feminine. He has a baby face and he's not the most substantial dog in the world (although he's adequate). Sometimes he just really has a girly look to him -

(yes, these are recent LOL) 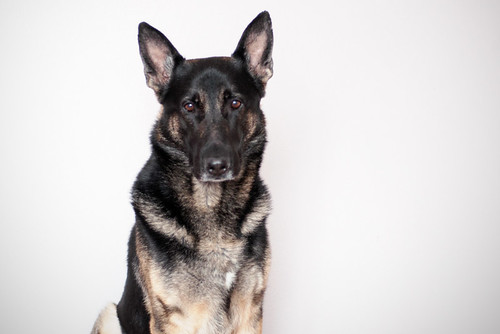 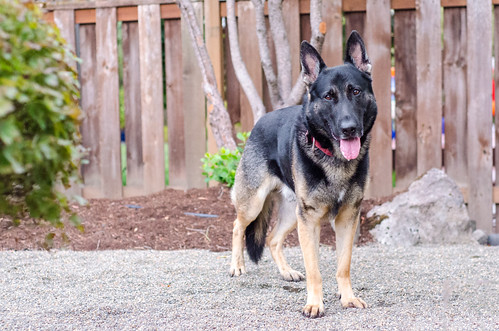 But from other angles, at other times, you can definitely see that he's a boy 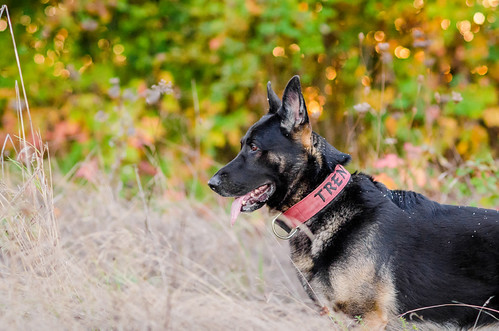 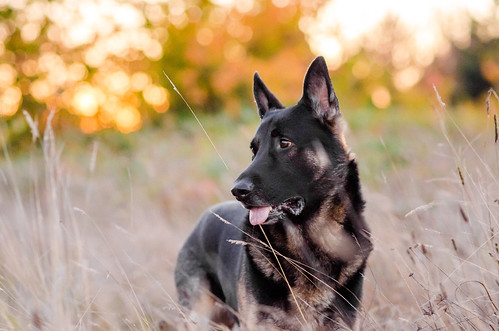 He's never, ever been mistaken for a girl. I don't think anyone's ever needed clarification on his gender, and I think it has a lot to do with being a predominantly black, fairly large, German Shepherd Dog. He is more solid in person than he appears to be in pictures, but I really don't think people are looking for secondary sex characteristics.

The red collar helps, too, but even as an adolescent/young adult (and a very generic collar) no one ever mistook him for a girl.

Rhys has been masculine looking from a young age. Poor Henry gets called a girl a lot.

I don't think Peewee has ever been mistaken for anything but what he was. Ivan once in a great while, a puppy YES all the time. Ivan has a borderline bitchy head. The rest of him is all male though. But if you where to put him next to other current male dals, he would look quite feminine even though he is correct for the breed.
B

Meg gets called a boy once in a while, which I think is funny, because she's pretty feminine to me and usually wearing pink or purple. But she's brindle, so I guess that means boy?

Gusto has just looks very boy-ish to me. In the last 8 months or so his chest got really broad and he's just...a boy. I'm not sure anyone has ever guessed incorrectly with him.