So this weekend Erin and I took Cthulhu to my grandparents house out in the country. As usual, he didn't get along with the dog or cats. But he did have a very fun experience with some sheep. He actually licked one on its nose for a bit, and was mostly calm around them. One did try to intimidate him (stomping it's hooves) and funny enough, it worked.

Had anyone else introduced their dog to a less than common animal?

Well, we live out in the country, so livestock are everywhere. Cows were the livestock of choice, but then some neighbors moved in with children and they were more interested in pets/4H animals than beef, so they brought in goats, donkeys, horses, and pigs. It was a bit of a rude awakening for our dogs as they weren't used to that kind of stock (especially when the neighbors would walk the goats and pigs), but they got over it pretty quickly and adapted after a week or two of supervision.

Chloe also grew up with my ferrets, so she's used to them as well. And Cynder lets the rats ride around on her back.

Yep- I make it a point when we're at town fairs, etc, to take Caleb to the "petting zoo" area, if there is one, and as long as it's OK with the people running it. Also, away from festivals he's been around goats, chickens, ducks, and horses that I can remember. Oh yeah, and rabbits (we have one, so he thinks all rabbits are his friend). The first time he saw a horse, tho, was at a parade. It was a rather large horse and passed within about 5 feet of us. Caleb's eyes got huge. I swear he thought it was a giant dog.
T

Another country dweller here... My dogs know all sorts of livestock!

... and REALLY want to know what they all taste like LOL

About the weirdest animals my dogs have met are cows.. They think barking at them will help them better understand what the are, lol. Or a tame raccoon. My APBT didn't care too much about it, but my Rhodesian wanted to EAT it. Lol

She also has to be good around cattle and horses as we own 2 horses and have the neighbours cattle over here atm.
Insider the yard she wants to chase everything - but outside the yaerd she really couldn't care less.

I trust the horses, I know they are good with dogs. Give lots of warning to a dog thats annoying them and are sensible enough not to put themselves through a fence because of one silly BC.
And I know Quinn despite all her macho is very nervous of them. I watch her like a hawk because she a) thinks the head is the dangerous part and b) wants to hang out around their back feet and try to bring them over to me.

She is pretty good though. She impresses me a lot considering I thought she was going to be a terror with them. 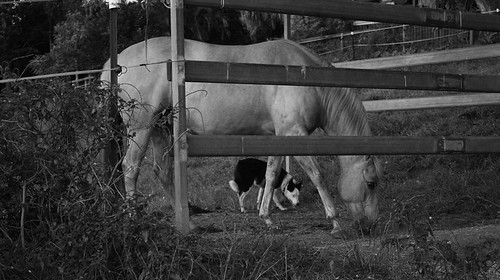 So far she shows about the same amount of interest in the cattle expcet I don't know the cattle as well as the horses so I keep her on a long line and at more of a distance with them.

Buster is great with the horses and I havn't taken him out with the cattle yet but he does want to eat the 2 calves through the fence (he pretends the big cows don't exist so he can stare at the calves with his wolf eyes.)
You must log in or register to reply here.
Share: Facebook Twitter Reddit Pinterest Tumblr WhatsApp Email Link