This is really cool this place allows us to promote dog related sites. I didn't see this until today. Anyway, I will fill you guys in on my dog related website.

How my business came to be is kind of funny. I had created the task cards as they are now called a couple of years ago because with Lars, I had started to get overwhelmed with how much stuff we had to work on between obedience and agility. I would get frozen with what to work on and then just fall into things we could do well because they made me feel great about where we were and avoid stuff that really needed work. On the flip side of that...if something showed up at a show or class that we needed a little bit more work on, I would become obsessive about getting that right. Both myself and Lars would become stressed over me hammering, hammering, and hammering what was broken in our routine. I made sure that I added some "Play" cards in the mix of my "prototype cards" because I had gone to a seminar about building drive in your working dog. Play was something that was talked about a lot and how important it is to build a dog's relationship with you. Especially in competitive obedience, engaging play isn't something people really spend time doing with their dogs. I created two large bags with all of these cards on them and kept adding cards as we progressed in skills and experience. I won't train without pulling cards now because it really helps me plan on what exactly I am going to work on - whether it be small pieces of that exercises, the entire exercise as it would be done in a show, or games based on that exercise.

Now that I have two dogs and both at very different levels of obedience and agility...I am using the task cards to teach Ocean higher levels and more technical handling skills. Of course he can't do a complete Utility Obedience exercise or Excellent/Masters agility stuff like Lars can, but I will start working the foundations of it with him if a harder card is pulled. I think the task cards will have him more prepared for higher level work sooner than Lars was because I was adding those cards as Lars and I advanced on.

One more reason why I like using the task cards and especially in obedience is as Lars is in the proofing stage now of Utility, they make sure we work on stuff he knows and knows well. Despite him being a very confident dog, he does stress some when we do all new stuff. He really likes it when I throw in exercises he knows he can do 100% with the new stuff...it keeps him motivated in his work.

So, fast forward to this summer and I was discussing training blogs and journals with a bunch of people and some how the task cards came up. I think it was someone asking how do you collectively decide on what to train. I brought up the task card system and people told me I should make those and sell them because they would buy them. I found that idea to be very interesting and I just filed that away in the back of my head. With my day job, I was thinking about making a change and I decided that I should test the waters with the cards. I spent most of my free time in July - August making cards in different forms, researching materials, and other business issues and ideas. I opened my etsy shop at the end of August and pitched the idea to a bunch of my training friends on Facebook.

Train 'Em Tasks has been very well received by those friends of mine and the sales started to roll in. Once I saw that the task packs and bags were useful to people, I decided to formally launch the business and created a website, twitter, and facebook page. From the response I've gotten from those who have ordered task packs (both friends and strangers,) I have a product that could really be something successful. So, I'm thinking of new ways to being to take tasks to higher levels like someday having a stand alone store along with Etsy, being present at large dog shows/trials as a vendor, having my task packs offered at training facilities or pet stores. That's sort of the big picture I have as I am working on small picture things and developing Train 'Em Tasks.

I'm having a photo contest on my FB tasks page! http://www.facebook.com/trainemtasks

I know you guys have working dog photos!! Like the page and then submit a pic for a free tasks pack and grab bag.

For those of you guys who like to do WCR rally...I have Level One task cards available!!

Okay APDT rally fans...Level 2 task cards are up and available!! Level 3 and the WCR Taskmaster Collection will be coming next month.

By popular demand...I am offering a new product line for Train 'Em Tasks! Prep Packs!! They are sort of like cheat sheets for different training venues.

So, the first of several to come is the AKC Rally Obedience prep pack! It has all of the signs from novice through excellent complete with exercise descriptions. The cards themselves are the size of index cards (approximately 3 x 5") so they are easy to read. I have also included scoring and jump height information in the prep pack. This will be a go to reference for AKC Rally you can stash in your training bag.

I thought I had made a post about this...and apparently I hadn't. Train 'Em Tasks is now offering fulled sized AKC Rally Sign packs so you can make your own rally courses at home to train on. We offer packs for Novice, Advanced, and Excellent only. We offer a complete (Novice - Excellent) sign pack. If you have an older sign set but need only the updated 2012 signs, we have a pack for that as well!!

Each sign has the description it's exercise on the back so you can reference it if needed. 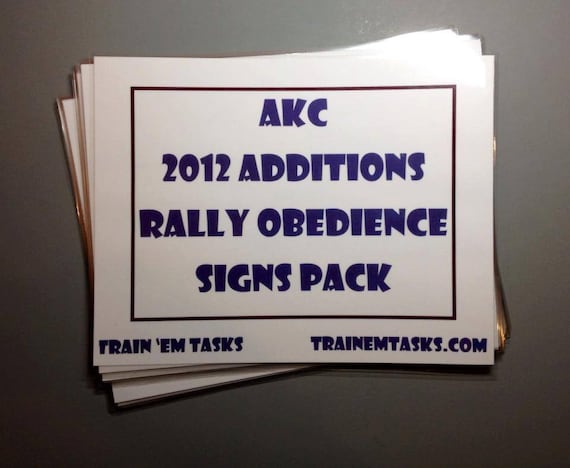 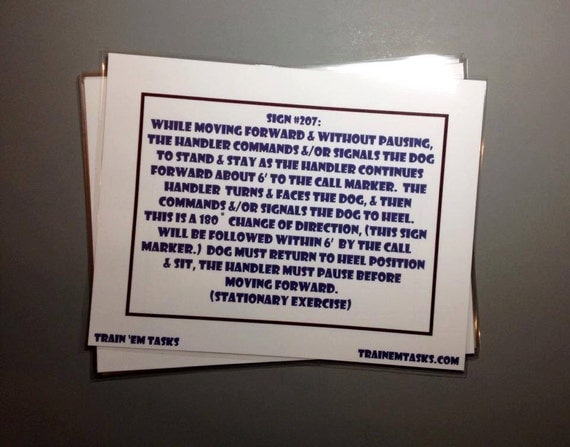 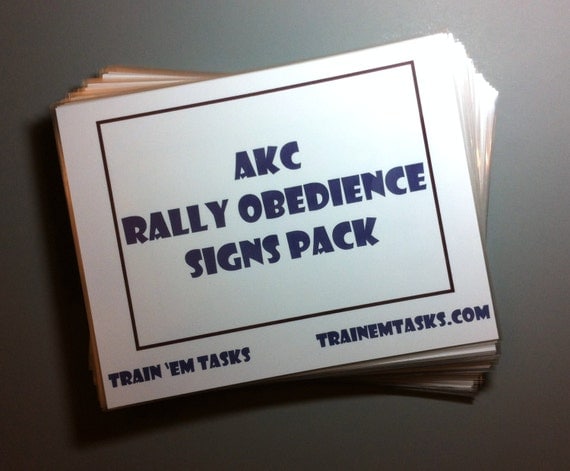 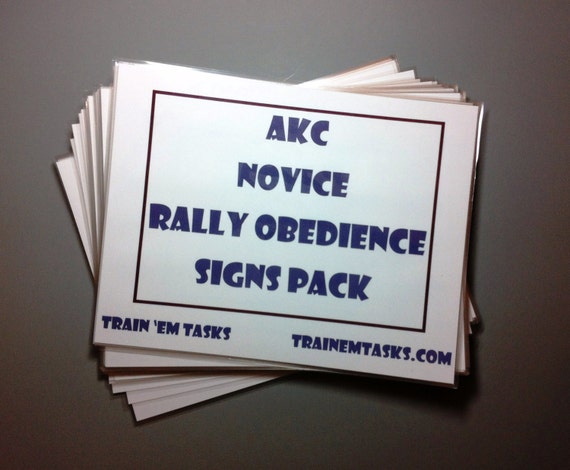 It's about time there's a new Train 'Em Tasks product available! I've been talking about them for a while on the Tasks Facebook page....and they are finally here: APDT/WCR Rally Prep Packs! 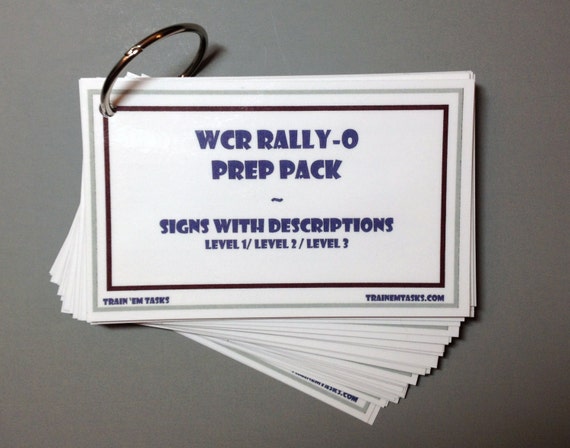 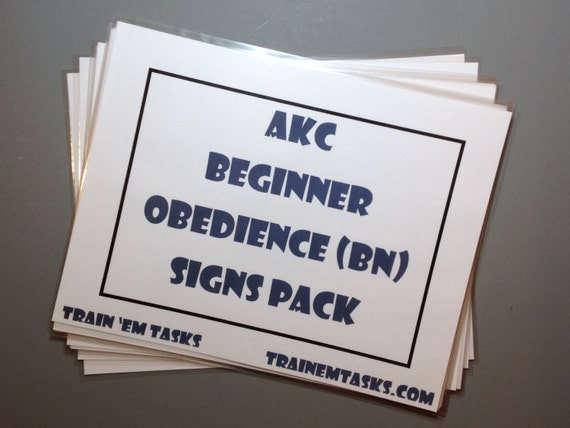 Beginner Novice is a great stepping stone from Rally Obedience to competitive obedience's Novice for a green dog or a green trainer. This has all of the signs that make up the heeling pattern in BN as well as the various exercises!

So, we are coming up on the first year anniversary for Train 'Em Tasks for this week! I would love to see if we can get the word out amongst the dog world and hit 1500 fans (we're 155 away!)

If you all could share the Train 'Em Tasks page with all of your dog loving friends and if we can get to 1500...I'll run a 15% off sale in celebration of a year in business and that Tasks has 1500 awesome fans!!

We haven't done a give away in a long, long time! We're going to have a fun, easy one this week. A lucky dog will win a task pack of their choice by luck of random draw. How to enter is comment on this photo and tell Lars which task pack your dog wants...and why! A random winner will be drawn on Sunday night (9/14/14.)

If you need inspirations for which task pack your dog wants....feel free to visit the shop. http://www.etsy.com/shop/TrainEmTasks?ref=shopsection_shophome_leftnav

I wanted to give everyone a heads up of all the new products I've got in the shop now. https://www.etsy.com/shop/TrainEmTasks 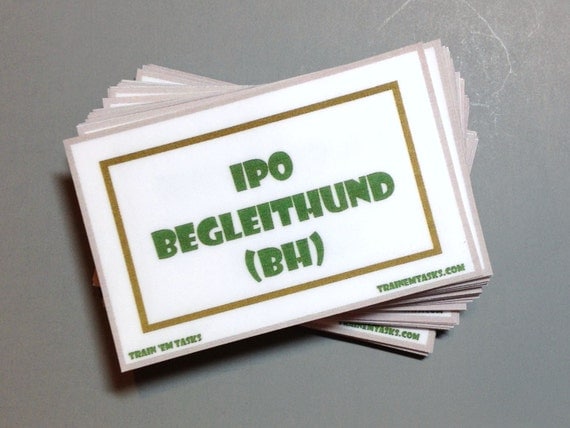 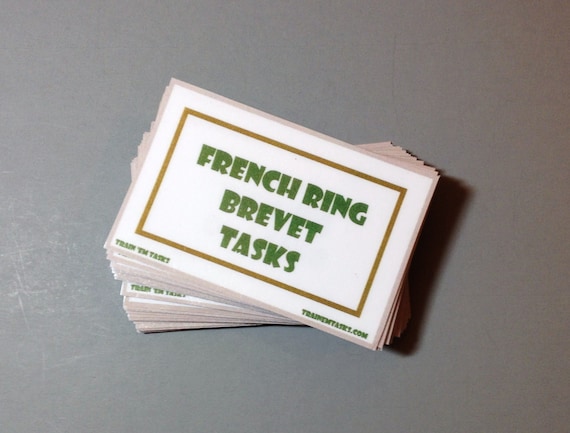 I've also made a task pack for AKC Graduate Open for those teams who have their CDX but aren't quite ready to take on Utility A. 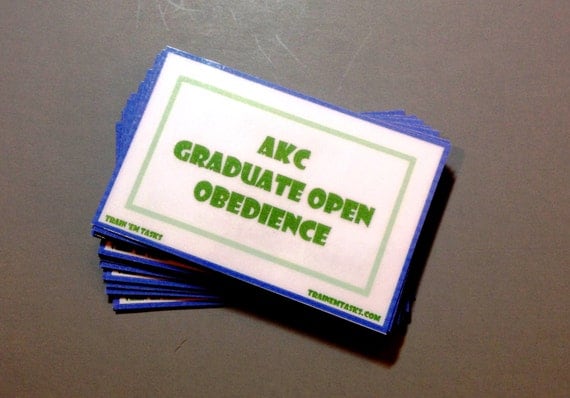 And lastly, I have a new text color on the grab bags - GREEN

I have them in large and small sizes and you have to ability to choose which color bag you want when you buy the collections. 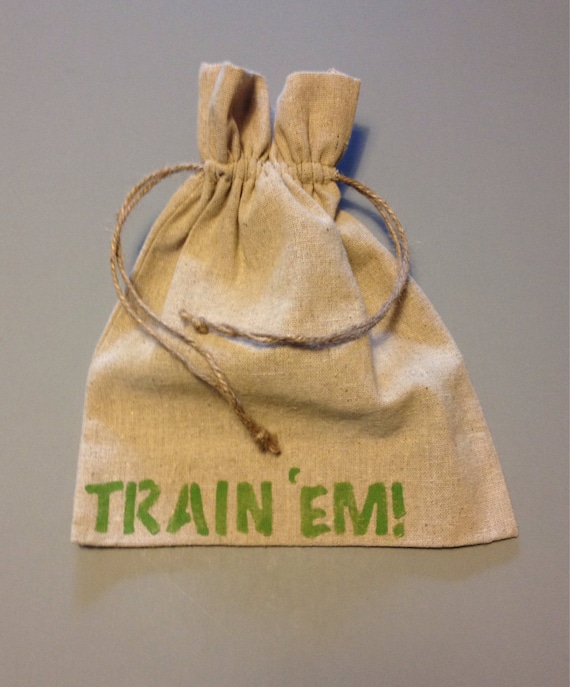 And...if you are more comfortable with shopping on eBay than Etsy...you can also get Tasks products there. http://www.ebay.com/sch/trainemtaskspacks/m.html?_nkw=&_armrs=1&_ipg=&_from=

Eventually there will be a stand alone Train 'Em Tasks online shop with the website...and that might be coming sooner than later.

Success Celebration Sale of 15% off of all the items in the Train 'Em Tasks Shop! Coupon Code is: 200sales15 and the sale runs until 11/8/14!! Thanks so much everyone for being the most awesome customers!!

Neat idea! I often just get overwhelmed with what to work on that we end up not doing anything.

And plans of trick cards being added in the future?

Yes...trick task packs are planned. I'm thinking of getting those ready this winter

I have some new rally products in the tasks shop. I'm working on full sized Rally signs (with the exercise description on the backs of the signs) for WRCL/APDT rally. These signs are the size you need to build courses of your own at home.

Right now, we have Level 1 and Level 2 available. But, Level 3 and complete packs with all three levels are coming very, very soon! 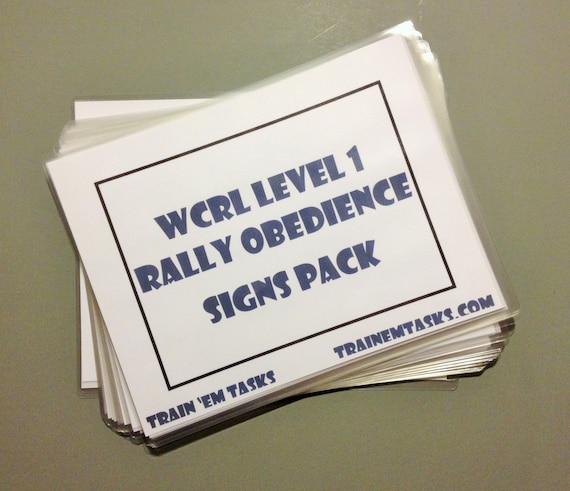 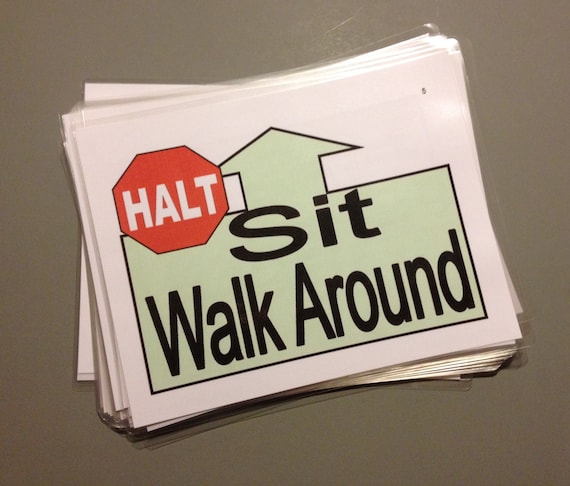 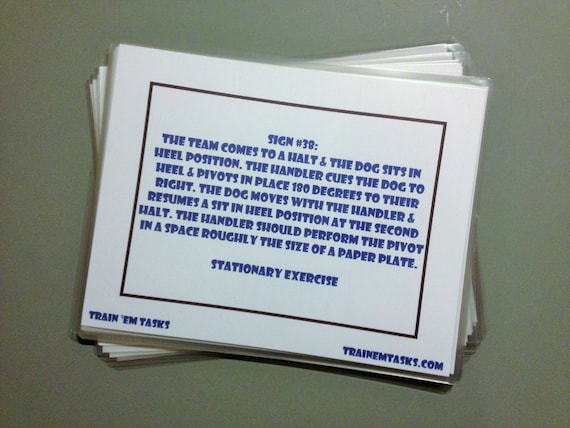