Max is a 14 year old Toy Poodle/Pomeranian. He has been living outdoors for the last 12 years!! I will never understand what pushes people to have such a small dog as an outdoor dog, any dog for that matter.
He is a fearless little guy, very sweet. Meet the boys (one by one) and just kept wagging his little tail at them. They all love him already!!
Max does have an ulcer (that's what the people that had him said it was) that the vet needs to look at. Vet appointment has already been booked.
I want to Max him somewhere warm and comfortable for his golden years, so here he is. :smile:

He is precious! Is he yours, permanently? Or a foster? He's so adorable, and such a funny little mix with your big guys!

Max is going to be my personal rescue. You should see all the big guys all over him, loving on him. It was love at first sight when they saw little Max This wasn't a planned addition either. Once I caught drift of his situation there was no way I would let it end like that. Not to mention that when I went to go see him, he almost got hit by a car!!:yikes: No way I was leaving without him safe in my car.

At 14 years, I don't think it would benefit him to be shuffled around, unless I come across the most perfect person, couple or family.

Your big guys are the best <3 Max has definitely landed in a good place.

You should have seen him when he was meeting everyone. No fear, just tail wagging. Sweet little thing. The look in his eye brings back my first dog Loco. He was a toy poodle, lived to be 15 years old. Same soft expression as my little Loco. I miss that boy.

How is he enjoying all the attention from his new big siblings? I am glad you were able to give him a safe home to enjoy his life in.

He's really, really cute. You're doing such a wonderful thing for him.

Wow -- he is SOOOO cute and so lucky to have you!
A

At least he's in safe hands for the rest of his days! ​

Moth said:
What a sweetheart.

How is he enjoying all the attention from his new big siblings? I am glad you were able to give him a safe home to enjoy his life in.
Click to expand...
Max has only been with us since last night, but so far he's doing great. Mike stayed home today from work, said he felt sick this morning (yeah right, lol. He looked fine when I left) I called at lunch to see how everyone is doing. He's been sleeping with Max on the couch for a couple of hours now He kept me company this morning too while I was putting my face on in the bathroom, looking up at me making cooing noises so I can pay attention to him instead of what I was doing.
So needless to say I think he will fit in just fine.


This is that weird growth on his side i'm concerned about:

Hes one special guy I can tell. And it sounds like your big boys approve. GO THEM!!!
B

aw! I demand pictures of him and the big boys together!

That looks like the warts I saw on TONS of cocker spaniels working in grooming. I'd definitely have it looked at by a vet, but my guess it it's a harmless, albeit annoying, probably unpleasant, wart.

He is adorable, and it's so great what you are doing for him! I'm sure he is more than thankful <3

This story made me teary eyed! Welome to chaz max!

I have nicknamed Max Peluche (pe-looch-eh). Means stuffed animal is Spanish, lol. This morning I was hanging out on the couch and he jumped up and sat beside me nuzzling my neck. He is so sweet. We are all smitten by this little dog.

Dallas has also taken a real liking to Peluche: 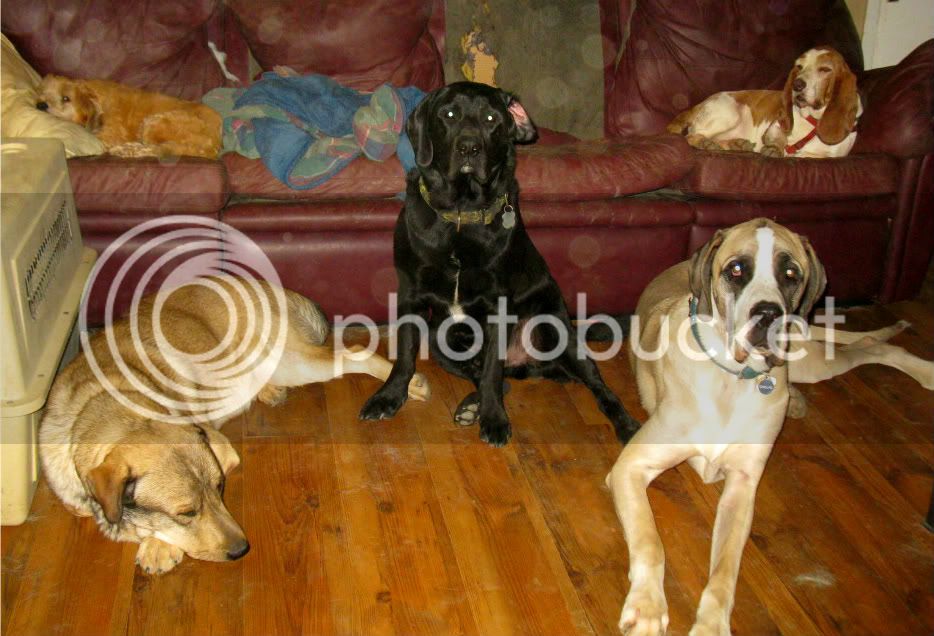 He does look like a teddy bear. A little otter teddy bear. And I love the name Peluche. Seriously he does not look 14 years old at all. He just looks awesome.

It sounds like he didn't like being outside all that much, but some of them love it.

My friends had a dog, also named Max, a Lab and something mix that had amazingly dense fur. He wanted to be outside, always, no matter how cold or wet it was. He would try to get out the door almost continuously from the moment he came inside the house. Most of the time, he didn't go far from home when he would get out, he had a route that included my yard, and the river, of course, where else could he roll in his favorite dead animals, fish?

His favorite place to curl up was in the middle of their driveway, unless it was raining, then he would go under the house, in the crawl space, where he had quite a set up with a bean bag bed and toys, and later on, a self filling water bowl that emptied itself every 15 minutes, and refilled itself. Even when he was nearly 17 years old, he wanted to be out there. I went over one day in a snowstorm and he was in the driveway, covered in snow. When he saw it was my coming in, he jumped up and came over and "talked" to me. I was his favorite person, period. He was one tough guy, surviving being hit by a car at least once, and he had heartworm twice. Finally, at 17, his hips gave out, and they put him down.