Equinox said:
Oh man. I don't really care for merle, but give me a dog that looks like Steve any day of the week, and I'll die happy. And BEAN. Bean is the exception to my meh feelings about merle. Bean is my perfect sort of merle and I want.
Click to expand...
I like my merles because they're pretty dark. So many of them have so much white on them, and I just don't dig that. I get a kick out of Bean. His breeder initially thought he was going to end up a cryptic merle but he kept enough of it that it's no secret.

My perfectly colored BC would be a minimal white b&w or black tri.

I think Shayde is fabulous. http://www.powertripp.org/shayde

In pit bulls, it's always the white with brindle patches dogs that appeal to me the most. Which is why I've never managed to own one
C

Paviche said:
When I got Rowan, I really liked liver Brittanys, but I'm 100% sold on orange now. I love freckles on the legs & face, but don't like orange roan at all. I like a nice clear pattern.
Click to expand...
Oh no, now it's so obvious that the colour I was referring to in Brittanys was orange and white, not red and white!

Since everyone else is posting pics. Here are some random pictures I found on google.

(okay so the coat is a little excessive but I love the colour).

I am also kinda meh about merle but there are some blue merle Rough Collies that I find absolutely BEAUTIFUL. 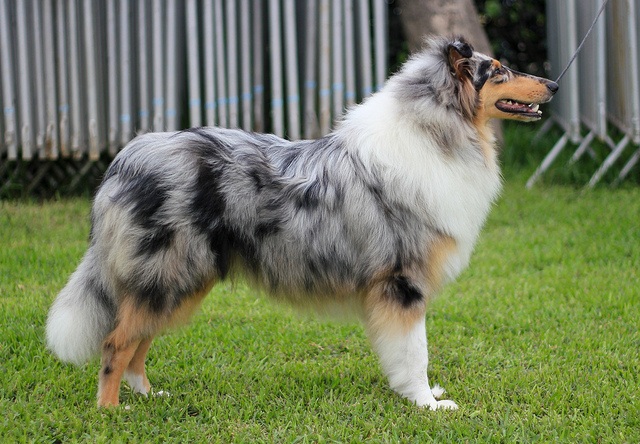 Basically traditional black and white BCs, especially dark factored or with little white on their faces.

TOTALLY biased but Paris! I love the markings on her face, haha.

And red BCs are pretty.

Though if you looked at my signature it would appear I only like black/white.

Paviche said:
In K/Coolies I like both black and red in bicolor, tricolor, and with tan points. I actually like solid red too, one of the few breeds I like a solid in. (Zip Tie is basically perfection though.)

I like tricolored springers, either black or (dark) liver. I LOVE big body patches on them, I think the Irish marking with a solid jacket is boring! An asymmetical blaze would drive me nuts. I LOVE freckles.

Equinox said:
True! They are the same sort of black/pointed tan as Doberman Pinschers and Rottweilers, but with a more extensive mask that hides their eyebrow markings and very often, the tan that would be on the chest as well.
Click to expand...
I am honestly kind of embarrassed that I never got around to putting that together before, haha. Thanks!

Prefer flashy (aka, with white) red brindle on pretty much everything that comes in brindle- except Boxers. I prefer fawn boxers with black masks. In whippets though, I like them to be white with brindle patches.

Spaniels and setters I prefer to be white with a few large red patches, red on the head and tail. But dominantly white... Just not too white- almost even amounts of red an white. GSPs I like liver- big patches with even ticking, not much clear white.

I like chocolate labs best. Red/white bicolored JRTs (I greatly dislike tricolred JRTs). Standard Black and Tan yorkies (I know some have blue instead of black, I prefer they don't), red or white Poodles... Deep red Goldens are awesome.

I like mostly black/minimal white BCs (like Fiest), and blue Merle Aussies (like Merlin). I like red ACDs with ticking. I like both Black and Tan and red and tan Dobes, not a huge fan of blue or white ones. And for GSDs, I love pure black GSDs, as well as sable- especially dark sable, I don't like lighter sable.

Corgis... Any color is cool. I do like red and white a lot, though.

Doxies I like red or in Black and Tan. And I've no clue why my iPod keeps putting Black and Tan in upper case.

Hm... I like huskies and malamutes in the standard color (I don't know the right term for it, I'm sorry),

I like Mia colored papillons, but Summer colored ones are cool, too.

Have I forgotten anything? Oh, I love black Staffies, chocolate or red APBTs, and Sako colored AmStaffs (like, Sako's exact shade and markings). Light red and white AmBullies are awesome.

Catsi said:
Oh no, now it's so obvious that the colour I was referring to in Brittanys was orange and white, not red and white!
Click to expand...
I have a hard time keeping colors straight, especially when what's it called varies by breed to breed! Chocolate lab, brown poodle, liver Brittany, red Doberman. Ugh. I could totally see red & white for Brittanys. When I got Rowan, my little brother was 5, and he got so upset when I called Rowan orange. "He's not orange, he's brown! Dogs aren't orange!" Haha... I got his kid logic, though!

Oh yeah, did I mention how much I love freckles? 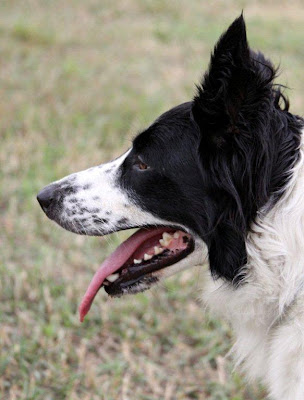 I forgot to mention something I really don't like: Brittany mustaches. Some dogs have a marking all along their upper lip and they just look so ridiculous. I feel like I see it more in show dogs than dogs bred specifically for hunting, but they might pop up there, too. I like this breeder's dogs (especially Chili!) but this one of her dogs has the dread mustache: http://www.flyinhighbrittanys.com/scosha.html

I like anything flashy. Red, black, fawn, chocolate, etc with lots of white. And while I like flash, I don't like perfect, symmetrical markings as much as mismarks. Like I love that all of Rhys's white doesn't match perfectly and varies a lot.

Kendall, I love the mustache.

My favorite is Merle - red, blue, whatever, just bring it with a fluffy coat. Gold or reds (think Goldens and Tollers) on fluff with white is also preferred.

After that, red and rust or black and rust on Dobes. It's so sharp.

My favorite is Merle - red, blue, whatever, just bring it with a fluffy coat. Gold or reds (think Goldens and Tollers) on fluff with white is also preferred.

After that, red and rust or black and rust on Dobes. It's so sharp.
Click to expand...
I SHOULD like it! Usually dogs with mustaches are hilarious. There's that pit bull picture that was going around and it's amazing. Just not on Brittanys. I'm breedist

That is one perfect mustache.

Man I love that moustache so cute.

That is the most perfect mustache ever!!!