I don't like Ru licking stuff because he leaves wet spots that are larger than himself. Nothing like rolling over onto a soggy sheet in the middle of the night, or attempting to explain that the couch is merely damp with chihuahua spit to a visitor.

He has been doing this since he was a wee baby, and for a while we wrote it off as teething pain. We try to discourage him whenever we catch him doing it, though at night he can be pretty persistent about licking something while falling asleep under the covers. My husband occasionally sprinkles cayenne pepper on the couch as a deterrent, but I draw the line at putting capsaicin in our bed.

My last hope was that it was related to mouth pain, but he had a dental a few weeks ago and stopped licking stuff until a couple of days ago. Now that his mouth is all healed up, he's back to licking again.

Apparently he's not the only one: 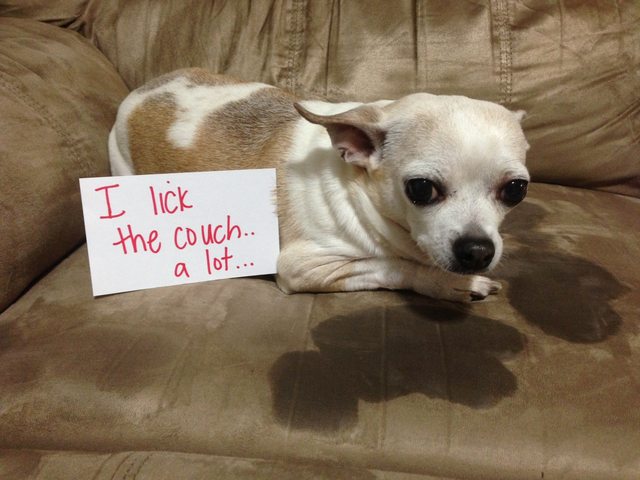 So, my fellow dog nerds, why do chihuahuas lick the couch?

My Collie mix does the same thing. I try to redirect her with a bone.

Crystal does this to my bed and blankets. Nothing like laying down to go to bed and landing directly in a fresh wet spot
B

You've got me, but Gusto will lick the arm of the couch/chair for ages while you are holding him. He has worn one arm smooth. We jokingly blame his oral fixation on being weaned too young.

Tucker also licks the couch. He usually starts by grooming himself, usually licking a front leg and then his tongue just migrates to the couch. It's a microfiber couch too so water (spit) leaves stains. I usually just stick a blanket or towel under him since he doesn't like their texture as much and won't lick them.

Well there went my plans to get a microfiber couch. Yuck.

Ru also tends to start out grooming himself and then switch to whatever is under him. It's always when he is snuggled up and comfortable. So weird.

Where is Meagan!? Rider does this!

Well there went my plans to get a microfiber couch. Yuck.
Click to expand...
Yeah I hate our couch with a passion. I always heard that microfiber was stain resistant but ours goes from looking brand new to looking like we live in a dump in like a week. If the dog jumps up there with wet feet or falls asleep and drools or chews a bully stick up there it's stained. I've stained it by sitting on it with wet hair. I can get the stains out but it requires a LOT of work. The whole top of the cushion needs to be sprayed with rubbing alcohol (because if you just spray the stain it'll leave a ring stain), then wiped with baby wipes until they come away clean, then rubbed with a cloth while getting blow dried evenly (if one area dries faster than another you'll get a water ring/line stain). It takes forever. Plus like I said the results don't last long.

It's annoying because the cushion covers come off but you're not supposed to put them in the washing machine (or use any water based solvent at all). I wonder what would actually happen though.

I don't even know. I've lived with dogs that ruined couches within weeks, and nothing stopped them. It's frustrating and gross.

Right now I'm trying to convince the puppy not to lick... Haha.

Leo sometimes does this. He is not obsessive, but he does do it. Usually licking his legs and migrating to the couch.

I just redirect him, and he does so pretty easily.
I can just say "Leo." and he will immediately stop licking whatever he was licking..

No idea why he does it though.

noludoru said:
I don't even know. I've lived with dogs that ruined couches within weeks, and nothing stopped them. It's frustrating and gross.

Right now I'm trying to convince the puppy not to lick... Haha.
Click to expand...
I'd suggest sprinkling your couch with cayenne pepper but I don't know how practical that is. My couch has washable denim slipcovers so it's not the end of the world when someone barfs all over it. The pepper deters Ru eventually, but he has a pretty high tolerance for spicy stuff and eats raw jalapenoes given the opportunity. (Insert Mexican dog joke here.) Thanks for the warning about microfiber, I always wondered why my relatives with the really pretty couch always sat on towels.

Does Bitter Apple work on fabric?

Her licking issues actually revolve around my skin. We scold her and redirect, but if someone lets her lick them obsessively she forgets everything she's been taught. Like when my friend did that last night and I almost put them both in the crate together. She's been licking non stop today.

Bitter Apple works on furniture, but you have to saturate it a few times.
M

Nia does the same thing and I have no solution to the problem either.

It's pretty annoying and sometimes I don't even think she realizes she's doing it. For example if for some reasons she wakes up at night or can't get to sleep very quickly because she's not that tired she will literally lick and smack her lips for hours.

It's not that noticeable during the day when she's able to go do something else like play with a tennis ball or a toy but at night when everyone's sleeping and she has nothing to do, it's the loudest thing ever and it wakes everyone else up. Telling her to stop doesn't really help as she'll just start once you leave her alone for a few minutes.

It's not teeth related or mouth related for her either, she's been checked out before, just a habit that's been impossible to break. I totally sympathize with you but have no solution either lol.

DJEtzel said:
Where is Meagan!? Rider does this!
Click to expand...
Lol! Danielle knows what's up. Rider doesn't limit himself to the couch. He will lick pillows and the floor as well, but his favorite is the sheet. It will literally look like he pee'd on the bed (I've smell checked many times).

I find it disgusting and tell him to knock it off. He usually listens, but sometimes I will have to be pretty firm (ie "tougher" voice).

Iggy is a toy sucker.
A

My Yorkie girls do this too. Bayleigh is the worst! She'll start out by licking her legs but then branch out to other things. The couch, floor, bed, doesn't matter. I think it's an obsessive behavior but I can't seem to break it.

My vet thinks it's related to allergies and gave us some medicated wipes for their feet for when they come in from outside. It hasn't stopped the licking at all. I'm thinking that was a waste of $20.

Anyway, I was hoping to come here and read a solution. lol Guess we're all in the same boat.
S

Just because I haven't seen anyone mention it...

I sat in on a seminar by a veterinary behaviorist who said that in his experience, obsessive licking is often related to digestive issues like acid reflux. Something worth thinking about and mentioning next time you're in, even if it's been going on since puppyhood.