I know we will never know what breeds Cricket has in her, but I think it's fun to guess. No matter what she will always be a mystery. We're looking for a place to live and everywhere we look keeps asking what kind of dogs we have. I have no idea what to tell them with Cricket so I just say she's a general mega-mutt.

Now that she is growing up some I thought it would be fun to guess again. So guesses????

Here are my guesses... and I could be way off base.

I think she has some whippet in her... brindled coat aside, she has a pretty refined head (you notice it more in person than photos), tight lips (flew).. her head is generally pretty small although shape wise it's not very whippet like I don't think. She has a long lean body, really long legs and she moves a lot like I've seen in some sighthounds. There's something about her though that makes me feel like she might have some sort of sighthound breed in her and if I had to guess I'd say whippet.

Outside of that... I know a lot of people keep saying Malinois, but I wonder if she might have some dutch shepherd in her honestly. Maybe that's just popping into my head because of her brindle coat... but... I dont know.

She's definitely smaller than one. She's about 19.5 inches and she was about 25lbs when we moved to GA, but she looks like she's grown a little bit and I haven't weighed her in a bit.

And some dutchie pics I found 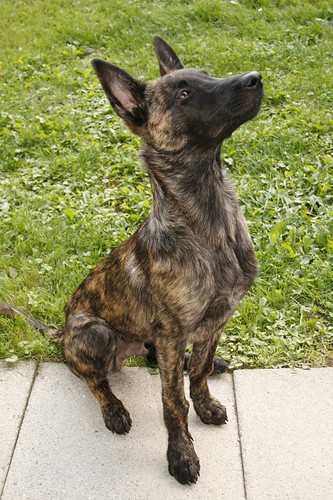 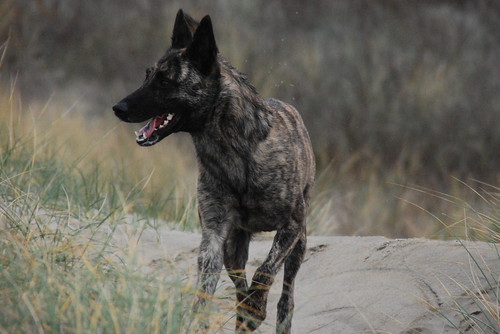 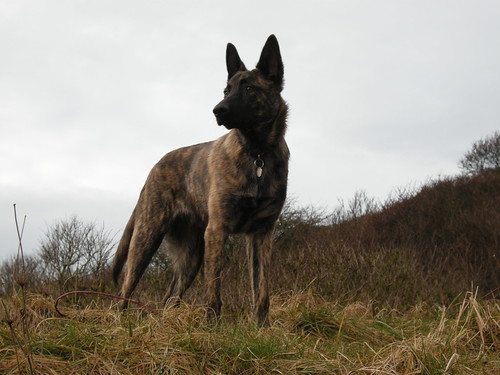 I just found this picture online of a whippet/GSD mix...

With those ears, I think Traveler hooked up with someone in Mexico :rofl1:

Not sure what part of Mexico she came from exactly, but in Tucson we had a ton of dutch shepherd clones come through. None of them actually behaved at all like dutchies though, and given their rarity I think there was some landrace streetdog mix strain thingy that just produced dogs that looked like them. They acted like a all around general purpose type herding dog. I always figured they had some shepherd and ACD, along with a bit of bull blood or something for the brindle to come from. They honestly look a LOT like Cricket, only a little more compact like an ACD rather than a running hound.

She definitely looks sighthoundish. Don't know if that could have come from whippet, or if greyhound tracks are very common down there. Some racing greys are pretty compact, like 21-24 inches. Or she could have staghound. Our old foster Seamus was found roaming pretty close to the border and he was a staghound.

This one is labeled as a shiba mix. lol

Dutch Shepherd/Malinois mix? She is a beauty whatever she is!

I really think the Cricket type dogs of the southwest/Mexico are just a brindle variation of the prick eared, red pariah mixed up "feral" types. A lot of the ones that came through our rescue were ferals pulled out of the Tohono O'odham reservation, and were littermates with dogs that looked like this one: 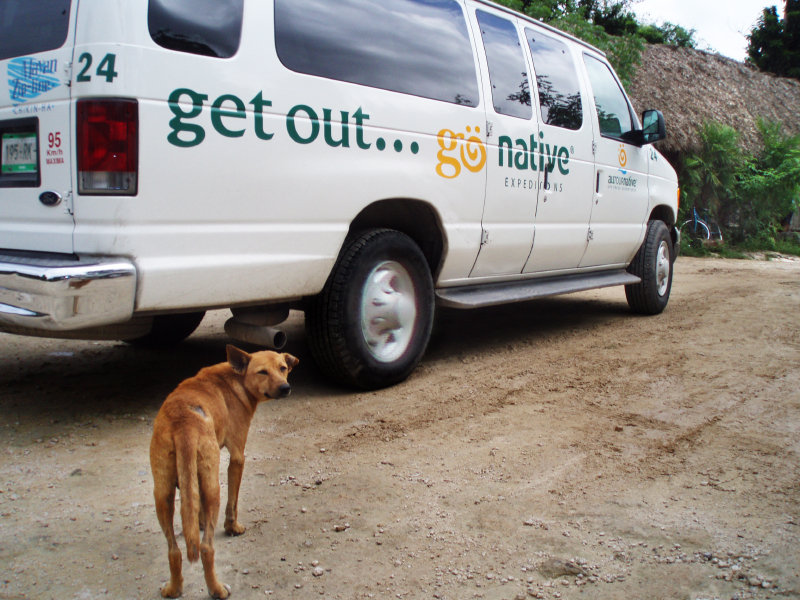 It makes a lot of sense when you consider brindle and black mask are dominant pattern genes, and you just overlay them on a red to get a dog marked like a dutchie.

ETA: Is she double or single coated? Just curious, since sight hounds are single coated and so are a lot of the crosses.

She's single coated. I actually googled Mexican street dogs early and that was one of the photos that popped up lol

Saeleofu said:
With those ears, I think Traveler hooked up with someone in Mexico :rofl1:
Click to expand...
Hey what happens in Mexico stays in Mexico

Even without seeing the Dutch Shepherd pics, I was thinking that's what she looks like. However, like someone else said, they're pretty rare. Depending how popular they are in the area she came from, I think you're guess of Whippet/Mal mix is pretty good. Heck, if you absolutely had to have a breed mix (for home rental, etc), I'd put down Whippet/Mal mix no matter how popular they are there.

Romy said:
I really think the Cricket type dogs of the southwest/Mexico are just a brindle variation of the prick eared, red pariah mixed up "feral" types.
Click to expand...
I was thinking the same thing. If she's an unknown mix from Mexico, it would seem pretty unlikely that she has a purebred parent let alone one of a less common breed like a Whippet, Mal or Dutchie.
S

She totally reminds me of a brindled version of Zuma... so whenever you figure out what she is, let me know. LOL

You could get her a doggie DNA test I have my bets that she comes out as a great dane, poodle mix. :rofl1:

But in reality I'd say she's probably a several generation "street dog." Apart from the brindle, she's the definition of a little, brown, short haired, muscular dog with prick ears that tends to be what dogs turn into if left to their own devices. And if I were you, since you really don't have a clue, if you're made to guess (such as on a apartment lease), I'd say she was a whippet/basenji mix or some other "innocent" sounding cross. You have no reason to believe she's a shepherd (though she certainly does look like a dutchie!) and you know just how hard it is to find a place with a potentially "dangerous" breed. I wouldn't be surprised if shepherds are on some of the banned breed lists. That's my two cents.

Yeah I'm guessing you're in the situation I am with Kim and Web...mutts likely born of mutts or dogs that were never a recognized breed in the first place...it's fun to speculate though

She looks like a Dutch cross but I'd say the likelyhood of that isn't great. I agree with Shai - she's likely a result of mutts who were the results of mutts She does look like she might have some kind of sighthound in her though. Grace would probably have a better idea of what kinds of dogs are popular in the area Cricket was born.
S

Multimix/pariah dog - she reminds me so much of the village dogs I saw in Trinidad!

For apartments I'd prob list her as a whippet mix, though.

She definitely LOOKS like a dutch shepherd X whippet mix, but I'd say the chances of that are pretty slim. I'm not sure what makes up the mexican street dogs, but i hear that term a lot.

I also don't know how common lurcher type mixes are down in mexico, but my guess would be a generic sighthound mix crossed with some sort of shepherd-type/herding-type dog...like ACD or german shepherd mix.

I'd say for apartments Whippet/GSD. I doubt many JQP know what a Mal is, but if they did, they may be more inclined to allow a GSD mix than a Mal mix. (Besides, she probably isn't part mal.)

Are coated xolos double or single coated? I just wonder, because xolos have a very sighthound-esque shape and demeanor. Can't wait until the village dog project gets done with the Americas. I wouldn't be surprised if there is some xolo type ancestry at some point in most of the street dogs down there.

I'm not sure... I think it was Renee that told me a while back ago that she wouldn't be surprised if there was some throwback xolo DNA in her lineage. I definitely can see the pariah idea and/or just a kazzillion different breeds involved... that's why it's so fun to speculate

~Dixie's_Mom~ said:
I'd say for apartments Whippet/GSD. I doubt many JQP know what a Mal is, but if they did, they may be more inclined to allow a GSD mix than a Mal mix. (Besides, she probably isn't part mal.)